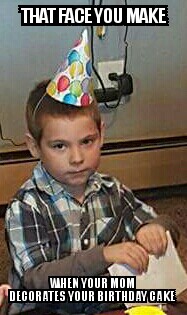 Look, I do not want to make excuses, but this is how my week was going:

I had battled through an 11 hour day at work Wednesday, stayed home sick Thursday, and then Friday I had the bright idea that if I put on makeup and styled my hair that I would feel better.  It only succeeded in making me feel very fatigued before I even took the big boys to school.  Being upright was a challenge.

So after I took the kids to school, Colin and I headed to the grocery store.  I had to do my normal shopping and order a cake for Sullivan and Guiliana’s birthday party on Sunday.  While I was stressing over if I should order a ¼ or ½ sheet cake, the nice lady at the bakery asked me what I wanted written on it.  I want you to picture this:  Colin would not stop talking, my head was floating 6 inches above the rest of my body, and my ears would not stop popping.  I could not even think straight.

“That’s all you want?”  she looked at me, skeptically.

“Yes, just a six.  Real big.”  Then I panicked because last year, I bought an “8” candle for Brady when it was only his seventh birthday.  I recounted the years from 2009 until 2015 in my head and felt better.  They were definitely turning six.

“You don’t want Happy Birthday or anything?”

We finished shopping and went home, and the rest of the day faded away.

I woke up Saturday feeling 25% better, I was on the mend and ready to take on my list.  I woke before everyone and I told Mark that I was going to get all the Christmas cards done, wrap all the Christmas presents, make salsa, make an egg-free cake, and run 18 miles.  He did not believe me.

I did not wrap any presents, and I only made it 5.5 miles before I thought I might collapse (Apparently I looked so bad on Friday that my dad offered to tail me for my entire run.  I told him it was unnecessary.  I did not want to prove him right so I cut my run very, very short), but I accomplished everything else.  And then we realized the basement drain was backing up all over our basement floor.  And we had to get ready for Mark’s work Christmas party.  The kids had just left to spend the night with their cousins when I decided to frost Sullivan’s cake.

Sullivan does not eat cake, but he requested that I make him an egg-free cake for the party so that Brady could have a piece of cake.  (Best brother ever)  Guiliana was having a cake made by her mother’s friend, so in addition to the “6” cake, they would each have their own cake.  Sullivan requested that I decorate his with Minecraft characters.  A cake decorator, I am not.  And I still was not feeling great, and I had to leave for the party, and the basement drain was backing up, and I just could not do it.   Again.

I have a history of this kind of behavior that dates back to my early mommy days.  I call it being “over-stimulated.”  When there are too many balls up in the air, I only catch the ones that REALLY matter and I let the other ones fall all over the floor.  Back when Brady was a new baby, I was over-stimulated all the time.  Hence, the picture on our Christmas card that year looked like this: This picture was taken the same day.  You can pretty much see the crazy in my eyes.  And Brady looks a little scared.

Back to Sullivan’s cake, I thought, what could I do that would make Sullivan laugh and is within my skill set?  And I knew exactly what to do.  I found the decorating gels from last Christmas to write “pickle” on the cake.  We still say “pickle” a lot.  Unfortunately, the first gel was too liquidy and it just ran all over the cake.  So then I chose a different color and wrote “pickle,” in handwriting that would rival any kindergartener’s.

And it was pathetic, but it was made with the love that only a completely exhausted mother of three could manage.

Fast forward to the party Sunday.  I proudly brought in my “6” cake and my “pickle” cake.  And they both were hilariously sad, and even more so when Guiliana’s beautifully decorated cake arrived.  But they did both have character.  I mean, seriously, how many kids have had a birthday cake that did not even say “Happy Birthday?”  I like to be original. 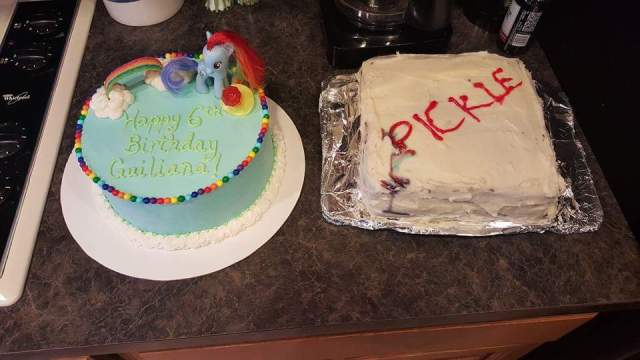 We had a wonderful party with our family.  I laughed with everyone over the “pickle” cake.  And honestly, just thinking about it now as I write this is sending me into a fit of giggles.

When the kids sat down in front of their respective cakes to sing “Happy Birthday”, Guiliana looked at Sully’s drippy “pickle” cake and pointed and said, “ewwwwww.”  It was all I could do to maintain my composure.

And then this picture was captured, where you can see Sullivan’s jealousy over Guiliana’s cake.

But all is not lost.  My cake tasted a whole lot better than it looked and I am fairly certain that I will not be tasked with bringing the cake for next year’s party.