I Really Do Have the #1 Mom and Dad

For years, I have been trying to nail down what my parents did to raise six cool, unique, and functional kids.  Then, today, while perusing Facebook, I came across this blog and this article, and it all came together. My parents never cared what other parents (moms) thought of them, and they allowed us to be who we are, even when it was hard for them (considering that my three younger siblings are all engineers, that might be hard to believe, but it is true).  And I think I am sort of the same with my kids.

To say that my mom did not care about what other parents were doing would be an understatement.  Most of my teenage requests in which my argument was based on the fact that EVERYONE ELSE could were met with a “we’ll see” (meant 95% chance no for the foreseeable future) or a “cha” (meant 100% chance no until you move out.)

“Do you want people to think you’re a drug dealer?”

“No one is going to believe I am a drug dealer.”

“Do you REALLY want me to be able to get a hold of you whenever I want?”

Back then, in the absence of social media and Pinterest, I think there was probably less pressure on moms to fit in, but even if it would have been there, I am sure she would not have cared.

I do not like a lot of things that many (maybe most?) moms embrace.  I do not like and/or willingly participate in:  making homemade Valentine’s for 20+ kids in my kids’ classes,  pretty much anything crafty or Pinteresty, the snack schedule, treat bags at birthday parties, anything that stresses me out more than it gives me and my kids joy.  And if other moms want to judge me, their opinion of me is none of my business.  I am not the best parent ever, but I was raised by them, and I think I am holding my own.

And even though my mom said “no” more than any other mom I know, my parents were never helicopter parents; they always encouraged us to be ourselves and to be self-reliant.

I think my dad expressed some mild disappointment when I quit piano lessons and when I never pursued becoming a Rhodes Scholar.  But he drove me all over the state for scholarship competitions, and he never tried to make me stay local for college, which is what I think he wanted.

When, at 19, I came home and announced I would be studying abroad the next semester, my mom said, “No you’re not.”  (She said the same thing when told her I was in love with Mark.)  But, in the end, my parents bought my plane ticket.

When my younger sister and I got married four months apart, my mom’s mantra was, “I’m going to wear beige and keep my mouth shut.”

And it was not just big things that my parents let us decide, we were just always encouraged to be independent and capable of taking care of ourselves.  It was little things, like doing my own laundry, making my own senior picture appointments.  At my college freshman orientation, I was the only kid in the whole group that picked out my own classes, without a “helpful” parent hovering over my shoulder.

My only goal for my kids is that they are happy and able to take care of themselves.  And though they are young, I try to let them do what they can, choose what they can.

When they need change for the arcade, I let them go to the counter to ask.  I have been trying to convince Brady to take up piano lessons to no avail (I understand your disappointment now, Dad.)  One of my mommy friends suggested that I just sign him up, but that is not my style. Plus, she clearly does not know Brady well, as someone does not simply sign him up for anything without his consent.

When me and my kids do art, it looks like this:

And when we decorate a Christmas tree, it looks like this:

And when they dress themselves, they look like this: 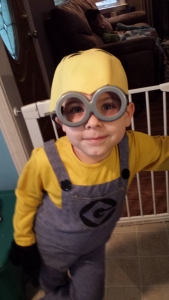 They are these crazy, cool, unique, messy people.  And I would rather help bring out their individuality and talent than squash it.  I just do not get wanting to bully or beat them into submission.

So, thank you Facebook and Facebook friends, for exposing me to these two pieces of writing that helped me figure out what I think my parents did right, and what I hope we are getting right.