We have been having problems with our AT&T Uverse service for the last several months. We have had two different technicians out to the house in recent months but our problems started again last week.

After a very frustrating “customer service” experience, they mailed me a new receiver. Brady could barely contain himself when he saw the package on the front porch and had the thing hooked up before I could stop him. He has a love of all things electronic/battery-operated/has-wires-that-need-to-be-connected and wants to be a “Uverse man” when he grows up. The receiver would not load and we kept getting errors. Two more online chats with customer service professionals later, they sent out a technician.

When the technician arrived (I did not catch his name, so I will refer to him as Sam), he took off his coat and I saw that his arms were completely covered in tattoos. He left the door wide open for more than a few minutes on several occasions, and he tracked dirt from outside all through the living room. He immediately reminded me of my older brother, and as his time with us stretched into 3 hours, I realized that it was more than just his tattoos and his disregard for tidiness.

Sam was frustrated that the two technicians that had previously been to our house had not thought to rewire it, and he told me so. He told me he would be doing work inside and outside of the house and that he would be at our house for awhile. I could barely keep Brady off of him. He was right there, every move he made, watching and asking questions and telling him all of the things we (he) had already done. I told Brady to back up and give the man some space, that he had a job to do, but it did not help too much. He kept addressing him as “Mr. Uverse man.”

When Sam had completed the work outside, he came inside to replace the wiring. As he worked in the corner, I realized that he was moving random toys out of the way. I apologized about the toys and his response was, “it’s okay, I‘ve got two hands.” He told me that he had kids, too, but I should have realized that because he is the only person that has been in our house that knew how to work the safety gate without asking. And then he did something that I will never forget: He looked at Brady and he said, “Come here buddy, can you pull this wire for me?” Brady looked at me for approval in shock/awe. I told him to go ahead, but only touch what he was told to. The next hour or so may have been the best of Brady’s life. He was assigned jobs, like to go to the basement to retrieve a cable or check to see if the basement television was working. He was able to really experience what being a “Mr. Uverse man” was all about.

Sam did not have to do that. It was a Sunday night, I know he just wanted to get off work and go eat dinner. But he did do that, probably because he was a compassionate, nice guy and he saw an opportunity to make a kid genuinely happy.

It would have been easy to look at him, with his tattoos, and his disregard for things like freezing cold air and dirt coming into my living room, and write him off. But I know better than to judge a book by its cover because of my brother, Bob.

My brother, Bob, was big and tall and covered in tattoos and I am sure he intimidated most people that he met. He wore shorts and walked barefoot outside all year round. We could not have been more different. I have always been an “old soul” and he was a perpetual twelve-year-old trapped in a man’s body. He was obnoxious, I was always prim and proper.

When we were growing up, he did the typical big brother torture schemes. I can remember being 7 or 8 and he did something to make me mad. I grabbed his homework and I threatened to rip it. “Go ahead,” he dared me. And I did. And he yelled for our parents to tell on me, but in the end, he got in trouble for telling me to rip up his homework.

He is the only person I can think of that has made me so mad that I could not find words, and instead just clenched my teeth and stomped out of the room. In spite of his sometimes juvenile behavior, he truly was one of the most deep, insightful, caring, and generous people that I have ever known.

I do believe that he would given the shirt off of his own back if he saw someone in need. When my heart was broken, he helped me compose a list of all the reasons I was better off.  One of my favorite quotes from his Black Book (a book he kept where he wrote down funny things that happened, funny things people said) was from Bob himself: “In the matter of death, no one really knows for sure, so I suspect we should all just treat each other the way that we would want to be treated.” (That quote is atypical of the Black Book, most of it is funny and not so philosophical.) He always remembered to call me on my birthday, which is remarkable, given that he was a busy, working, single-father. He would call me if he saw something that reminded him of me, like a program on food allergies that he thought I should see. And then the last day that I saw him, he had drawn pictures of peanuts and eggs and had them hanging all over his house in another attempt to terrorize/entertain me. That night, he was in the midst of his own personal turmoil, but he asked me if Mark was good to me. I said he was. “Good,” he said, “I like Mark.” He had the same conversation with my sister.

Sam reminded me a lot of my brother, and I know that if Bob would have been a “Mr. Uverse man” he would have absolutely employed the help of an overly-interested seven-year-old and he would have gotten a total kick out of it.

And in seeing so much of my brother in Sam, I think sometimes you can tell a lot by a book’s cover, it just might not be the story you had in mind at first.

Bob with his daughters 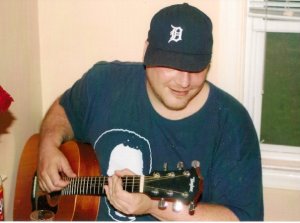