The Christmas Vacation That Would Not End

At the beginning of Christmas vacation, I was so sad because it was going to be so short. Brady only had 8 days off school and I had only taken one day off of work, we were not going to have very much time together. But then, once you throw in half work days for the holidays Eves, the day off for the holidays, a couple of unexpected half days due to bad weather, and 4 straight days of school being canceled, we have actually ended up with a lot of time together. A lot. We have all been together a lot.

We are all going a little stir crazy, but it has actually been really nice. Even though I have been at least half working over the past 2+ weeks, I have essentially been on vacation from real life. With no school to get to, I have one drop off instead of three, and most days, I have not had to take the kids out at all because was Mark was home. The days I have had to take the kids out, I have started work later than normal so we have all gotten used to sleeping in. I use the term sleeping in loosely as I do not believe most people would consider 7:00 am sleeping in. I have been at home way more than normal so I have gotten incredibly lax. Gone is the need to clean the kitchen before bed because I actually will have time tomorrow to clean it. I do not have to stick to doing a load of laundry every day because it does not really matter if I let it pile up, I have time to catch up. I have completely stopped picking up the living room, because with the boys all home, there is no point. My mom would say it is like shoveling while it is still snowing. The boys’ Memory game stayed dumped out in the hallway for 3 days before I finally got around to picking it up. I posted a picture on Facebook and actually had to crop the mess on the floor out of the picture. I have traded in housework and uptight schedules for lazy days of playing in the snow and doing science experiments. I am like slow-motion Jill; I am even running slower! It has been a really nice vacation from the real world.

I thought things would be getting back to normal this week, but thanks to the weather, it will still be a couple more days. I am afraid I have been away too long and will not be able to adjust. This is why I never take more than one week off from work at a time, it is too hard getting back into the swing of things. But I must and I will. But maybe some of my lowered housework standards will stick around. The other members in this house sure did not notice! 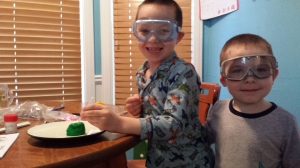