Brady had his first T ball game today. When we got to the field, I made myself comfortable on the bleachers. Yeah, I thought, I can see myself as a baseball mom. I have three kids so there’s the potential that I’ll be spending many an hour in the baseball bleachers.

A lady sitting on the bleachers asked me if we had a child playing. I told her that we did. She wanted to know his name and number. I told her the info as she wrote it down in a little notebook. I thought maybe she was the coach’s mom or something, she seemed pretty legit.

As the game started, she asked if I had an extra pen because hers was running out of ink. I happily gave her the pen out of my purse.

Brady was the last to bat for his team. He had a nice hit and then proceeded to run to third base instead of first. It was funny and sweet, I laughed.

As the game went into the second inning, I realized that the lady was keeping track of runs and outs in her little notebook. That’s weird, I thought, I didn’t think they kept score for T ball.

A few minutes later, an older boy in a baseball uniform came up to her and asked her the score. She told him and said, “Shhh, keep it quiet though. Remember, we aren’t supposed to be keeping score.” Okay, that’s really weird, I thought. At one point she called out to her husband (who had placed himself in the dugout and seemed to be equally toolish) to ask if the other team’s runner was out at the home plate because she didn’t see the play. Geez, this lady’s really serious about the score here, I thought.

Our team made a really good play and threw out a kid at first base. I commented out loud about how you don’t expect to see plays like that at T ball. She proudly announced that the fielder was her grandson.

“Well, my kid is the one that hit the ball and then ran to third base,” I said as I laughed.

She looked at me with pity and said, “Awww, honey, I’m sorry. He’ll learn.”

I wanted to rip my pen out of her snide little hand but instead I had the following rant in my head:
What?!? Do you seriously feel sorry for me? Well, I feel sorry for you that you have to sit here and get your jollies by keeping score at a T ball game. I’m glad that you are proud of your grandson. My kids make me proud sometimes, too, in their own weird way. Like when Sully says, “Okay, Mommy, I won’t call you an idiot. I’ll call you a nice mom!” And today, I was proud that Brady actually stayed on the field when he was supposed to and didn’t go running off in search of a playground.

I’m sure that as my kids get older they will be naturally gifted for some things and not so much for others. And I’m sure I’ll be proud of them when they excel but you will NEVER catch me being ashamed or embarrassed by something like their baseball skills (or lack thereof.)

If they grow up to be jerkfaces, the kind that would sit at a T ball game and secretly keep score, well THEN I might be ashamed. 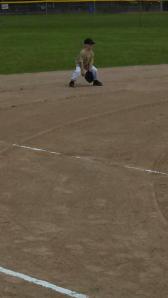